tube extruder made in china 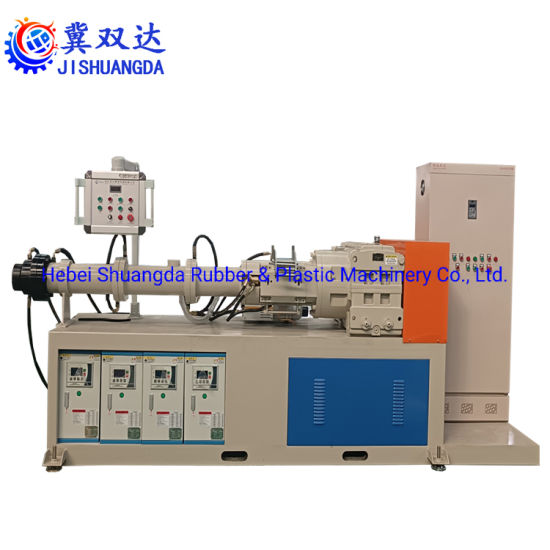 Shen Wei Da reports having over 50 twin-screw extruders for PVC in the U.S. One customer, Silverline Building Products, has a number of them similar to this one.

Not all buyers are happy with Chinese extruders. Newlab Plastics says it was promised a state-of-the-art WPC line and reportedly got rusted, used equipment instead.

Chinese-built extruders are arriving here in small sizes and modest numbers. Most are bought one at a time by large, sophisticated processors who are sampling the Chinese market and can afford to throw a machine away if they don’t like it. Some are being bought by small start-up companies tempted by prices only one-third to half those of North American or European extruders. Some of these North American buyers felt they got a good deal and ordered more machines. Others have gotten burned.

Most of the Chinese extruders in the U.S. and Canada are making PVC pipe and profiles, but some are used on specialty extrusion lines for composite and corrugated pipe, wood/plastic profiles, and blown or cast film. The most frequent general problem encountered with Chinese extruders is electrical compatibility issues, ranging from relatively benign—e.g., replacing a Chinese controller with a U.S.-made one—to catastrophic. Wires, for example, might be the right color but too thin to meet our electrical codes. In the worst cases, processors had to call in electrical contractors to rewire entire machines to bring them up to code. The added cost, from $50,000 to $60,000 per line, in some cases nearly doubled the ultimate cost of the extruder.

The Chinese machine builders listed in this article all actively market extruders here and exhibit at international shows like Chinaplas in Guangzhou last May, NPE in Chicago last year, and the K Show in Germany last month. Most of these Chinese OEMs are offshoots of large former state-owned enterprises and come from a tradition of mass producing generic machines with little ability to customize.

“These machines are ideal for the Third World, where a processor may want to run HDPE, LLDPE, and nylon all on one machine and labor is cheap and they don’t care about output rate,” says extrusion consultant Paul Waller, president of the Touchpoint Group, who has been called in to fix Chinese extruders. For reasons like those he cited, most Chinese extruders are exported to relatively unpicky and unregulated markets in the Middle East, Africa, and South America.

Lately, more entrepreneurial Chinese machine builders are trying to gain access to more advanced technology and are forging partnerships with U.S., Canadian, and European OEMs to meet standards for export to those markets. As a result, many export-model Chinese extruders offer German or Japanese computer controls and European gears, drives, and thickness gauges.

Yet it is still a case of “Buyer Beware.” Though a large number of extruders at this year’s Chinaplas exhibition sported what looked like Siemens controls, some were empty boxes “just for show,” says Siemens’ sales manager Holger Schurmann. However, he notes that many Chinese builders of extruders, including one of the largest, Shanghai Shen Wei Da Machinery Co., do use real Siemens controls on their machines.

Even then, buyers need to look closely. Some U.S. processors say they specified Siemens controls on extruders and received simple, inexpensive Siemens controls built specially for Chinese injection molding machines, though the controls can sometimes be used for extrusion. Siemens discontinued those Chinese controls last September. The moral is that buyers should specify a particular model of Siemens controller and then be sure that what arrives isn’t just a box with a Siemens’ name.

Don’t be fooled by a nice paint job. One disgruntled buyer of a Chinese extruder recalls, “From the outside it was beautiful. It looked just like a KraussMaffei, but it couldn’t hold temperatures and the output suffered. It worked, but I wouldn’t buy another one.”

Another Chinese builder of blown film extruders, Sun Centre Machinery Co. (represented here by Karlville), says it has 11 blown film lines in the U.S., including eight in California and two in New Jersey. Sun Centre also supplies winders, oscillating nips, and bubble cages to processors here. Its standard controls come from Fatek in Taiwan; Japanese or German controls are optional. Sun Centre exhibited at NPE last year and showed a three-layer line with an oscillating nip at the K Show last month; it was sold to a processor in Israel.

Han King Plastic Machinery Co. in Taiwan also claims to have blown film extruders in the U.S. and Canada. It exhibited a large tower at Chinaplas for five-layer barrier film with up to 1.6-meter layflat. The line was touted as “super high speed.” It had grooved feed throats, barrier screws, and 50-hp AC motors. Han King uses a thickness gauge from Octagon Process Technology in Germany, as well as Octagon’s dual-lip auto-gauging air ring.

Twenty-year-old Shen Wei Da says it has over 50 twin-screw extruders in the U.S. One customer, Silverline Building Products (now part of Andersen Corp.), initially bought one to try out, then added 10 more in its Durham, N.C., window and door profile plant, despite some issues with overheating, a company source says. Silverline also bought from Shen Wei Da a 90-mm parallel twin-screw that was shown at NPE 2006.

Zhejiang Jinhai Plastic Machinery Co., also called Jinhu, showed a PVC foam board line at Chinaplas earlier this year. Jinhu claims to have delivered 20 extruders in the U.S., mostly for small PVC pipe. It makes both single- and counter-rotating twin-screws.

Beijing Great Wall-Peony Mould Manufacture Co. is a five-year-old company started by two Chinese electronics makers. (It is represented here by Skyreach Group in Toronto). Great Wall builds calibrators and is an agent for extruders built by Jiancheng Machinery Co. in Beijing (also represented by Skyreach). Skyreach claims to have sold over 20 Jiancheng PVC extruders from 20 to 75 mm diam. here since 2004, all to firms in the Toronto area, for making pipe, window profiles, and foamed PVC. It supplies single-screw and conical and parallel counter-rotating twins.

Nanjing Ruiya Polymer Processing Equipment Co. in Nanjing City also recently developed what it calls a “Buss kneader.” In addition, Ruiya claims to have delivered three of its Model TSEW 95 corotating twin-screw extruders in North America, all with an extremely long 68:1 L/D.

Shanghai Jwell Machinery Co. has one PVC pipe extruder in the U.S. at North American Pipe Co. (part of Westlake Chemical Co.) in Houston. A source there says that after some electrical reworking to solve connectivity problems, it is running in the Wichita Falls, Texas, plant.

Jwell builds conical and parallel counter-rotating twin-screws and single-screw extruders for PVC, including wood/plastic composites (WPC) and foamed profiles. It also builds dies, single- and double-wall corrugators, and downstream cooling and takeoff equipment for up to 800-mm-diam. corrugated or smooth HDPE pipe. It advertises TUV- and CE-compliant machines for the European Union with Siemens controls and claims to have ISO 9001-2000 facilities. Jwell exhibited at the K Show last month.

Guangdong Liansu Machinery Manufacturing Co. claims to have delivered one extruder in Canada for large spiral-wound pipe. Liansu builds corrugators for up to 1.2-meter-diam. pipe and has designed one for up to 1.6 m. Mold sections rotate on tracks, not chains. Liansu exhibited at NPE last year and at the K Show last month.

Chinese machine builders have entered joint ventures with established European machine builders to make their machines more acceptable in export markets. Ningbo Fangli Group Co. has had a joint venture with Graewe GmbH Maschinenbau in Germany since 2003, to integrate Fangli’s pipe extruders with Graewe’s high-speed pipe-coiling technology. Graewe-Fangli extruders and coilers use Chinese-built Siemens controls with software written by Fangli. Fangli says it has exported three extruders with striping coextruders to the U.S. this year to make HDPE pipe up to 450 mm OD. Fangli exhibited at NPE last year.

And Foshan Techwell Plastic Machinery Co. in Foshan City says it has a partnership with CPM Milacron. CPM was a German builder of parallel twin-screw extruders, acquired a few years ago by Milacron Inc., but no longer an active business entity. Techwell claims to have sold one counter-rotating parallel twin-screw machine in the U.S. to make large PVC pipe.

The most highly publicized debacle involving Chinese-built extruders is an extrusion line for WPC decking sold by Futuresoft Technologies in Millburn, N.J., to Newlab Plastics Ltd., a start-up in St. John’s, Newfoundland. The extruder was built by Jwell and other components by other Chinese suppliers. The line cost $505,000 initially plus another $200,000 to completely rewire it after it arrived