In extrusion and injection molding production changeovers, processors seek to minimize downtime and material waste while ensuring that the next product run is free of contamination from the previous run. Pulling the screw out of the machine can be a more cost-effective alternative to using commercial purging compounds for purging and cleaning the screw and barrel. By following the total-cleaning method described here, it is possible to eliminate contaminant from the system in just one or two hours while avoiding damage to precision-engineered plasticating components.

Although the total-cleaning method may not be cost-effective or even practical in the case of large extrusion, blow molding, or injection molding equipment (where commercial purging compounds may be a better option), for machines with screw diameters less than 100 mm (4 in.) it is a fairly easy task to pull the screw from the barrel for direct access to surfaces that must be cleaned.

First, here’s what not to do: It is very common for maintenance departments to use an acetylene torch as part of the screw-cleaning procedure. This is a big mistake. Plasticating screws are manufactured with exceeding precision. Most of the tolerances on the screw are within ±0.001 in. (0.025 mm). Screws are straight to within 0.004 in. (0.1 mm) and have a highly polished finish. Use of a torch will not only affect these closely machined tolerances but may destroy the metallurgical properties of the base metal.

Most screws built for extrusion are made of 4140 hardened and tempered steel. When isolated heat from an acetylene torch is used to remove plastic from the root of the screw, it will cause the metal to expand on that side of the screw and thus cause the screw to bend. Once the screw cools it is highly doubtful that it will ever be as straight as it was originally. And if the steel is heated to a point where the isolated area turns a permanent blue, there will be metallurgical changes to the base metal. On some occasions it actually causes a delamination of the base metal, with a large portion of steel separating itself from the main body of the screw.

Most injection molding screws are manufactured from tool steel so that they withstand abrasive wear from the resins being processed. The base metal of such screws has been heat-treated to increase hardness. If isolated heat from an acetylene torch is used to remove plastic from the root of the screw, it may anneal the base metal and reduce the wear resistance in that area of the screw.

The first step to cleaning the plasticating system is to purge the screw. Begin by closing off the flow of the resin that is being processed, typically by closing the slide gate at the bottom of the resin hopper. Next, reduce the screw rotational speed to approximately 15 to 25 rpm and let it operate at this speed until polymer stops flowing from the end of the extrusion die or out of the injection nozzle.

All of the barrel zones should be set to achieve the recommended melt temperature for the resin being used. The machine needs to reach this temperature before proceeding with the purging process. A fractional-melt (0.35 MI) HDPE is generally a good choice for use as a purging compound. The screw size will determine the amount of purge resin required for the system. For example, on a 2-in. (50-mm) diam. screw, the amount required would be about 10 lb (5 kg); while a 3.5-in. (90-mm) screw may require 33 lb (15 kg) of purge material.

Depending on the type of extrusion process, it may be necessary to remove the die or head tooling to reduce over-pressuring the end of the extruder. This is why it is very important during purging that extreme caution be used and two operators perform this portion of the process. One operator should be at the control panel to observe the screw speed and drive-load meter to ensure that the drive does not overload. The second operator needs to observe the head-pressure gauge to make sure that the system is not over-pressured. All the while, the screw should be rotating at about 15 to 20 rpm.

If the die must remain on the extruder, the purging process should continue until complete transition takes place from the process resin to the purging resin.

Once the die has been completely purged, screw rotation can be stopped so that the die on the extruder or the endcap on the injection machine can be removed and the end of the screw can be exposed. With the die or endcap removed, the screw can be restarted and rotated at about 10 rpm to allow the remaining purge resin to be pumped from the screw.

To prevent damage to components, do not use steel screw drivers, scrapers, or pry bars when cleaning screws and barrels. The appropriate tools and cleaning materials needed (see Fig. 1) are few and simple:

Once the resin has stopped extruding, the screw must be removed from the machine. For an extruder utilizing screw cooling, the rotary union and siphon tube assembly and hoses must be removed. Then use the screw extractor mechanism attached to the extruder gearbox to push the screw forward in the barrel.

Push the screw until about four or five turns are exposed for cleaning (Fig. 2). Use the brass putty knife and brass wire brush (Fig. 3) to clean away the purge resin from the screw channels. Then expose another four or five turns and continue the cleaning process. After large amounts of purge resin have been removed with the brass putty knife and wire brush, stearic acid should be

Once the entire screw has been polished with brass gauze, use a soft cotton rag for a final cleanup. The screw channels (Fig. 4) and flight outside diameter can be cleaned to pristine condition to ensure that there is no contamination in the next run.

Now the screw can be set aside until the barrel has been cleaned, or it can be placed on the screw rack until it is needed for a subsequent production run. If the screw is placed on the storage rack, it should be sprayed and wiped down with a light oil to prevent rusting.

It is useful to note that chrome plating not only helps prevent plastic from building up on the root of the screw and improves feeding of the plastic, but it also protects the screw when it is stored between production runs.

This method of purging and cleaning the plasticating system is designed to speed the turnaround between color or material changes while returning components to a pristine condition. In many cases it can provide a cost-saving alternative to use of commercial purging compounds. At the same time, the method described here prevents the damage to screws and barrels that can be caused by certain all-too-common maintenance practices.

Tim Womer is a recognized authority in plastics processing and machinery with a career spanning more than 35 years. He has designed thousands of screws for all types of single-screw plasticating. He now runs his own consulting company, TWWomer & Associates LLC. Contact: (724) 355-3311; tim@twwomer.com; twwomer.com

Mark Colella is the global product manager for Nordson Xaloy, New Castle, Pa., a leading supplier of screws and barrels for extrusion and injection molding. He previously served as dir. of engineering and manufacturing for Xaloy. Contact: (724) 656-5600; 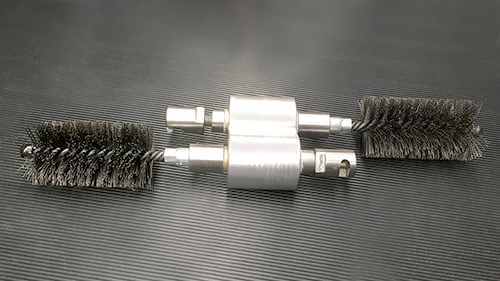 Deposits of degraded material build up on the screw by daily use during the processing of thermosets and thermoplastics and lead to loss of quality. These contaminants must be removed from the surfaces to ensure smooth and clean color or product changeover.

The systems from SCHWING clean also flat film dies, breaker plates with filters, and large components such as blown film heads, screen changers, breaker plates or extruder screws for plastics of all kinds, because they have special large and especially powerful machines available.

Fire burning or fire roasting is the most common and effective method used in plastic processing companies to remove the plastic fixed to the screw of the twin screw extruder machine. But never use acetylene flame to clean the screw.

Correct and effective method: Clean the screw with a blowtorch immediately after use. The heat distribution of the screw is still uniform because the screw still has the heat generated during processing.

Commodity economy is highly developed today, and there is no lack of various screw cleaners (screw cleaning materials) on the market. For most of them, the price is not cheap, and the using effect varies greatly. Whether using commercial detergents depends on different manufacturers and production conditions. Plastic modification processing enterprises can also use different resins to do screw cleaning materials according to their own production conditions, which can save a large sum of money for the companies.

The first step to clean the screw of laboratory twin screw extruder is to turn off the feeding board, that is, to close the feeding port at the bottom of the hopper. Then reduce the screw speed to 15 to 25r/min and maintain this speed until the melt flow stops at the front end of the die head. All heating zones of the barrel shall be set at 200°C. As soon as the barrel reaches this temperature, cleaning should be started immediately. Depending on the extrusion process (the die head may need to be removed to reduce the risk of excessive pressure in the front end of the extruder).

Cleaning must be done by one person: The operator watches the screw speed and torque from the control panel, as well as