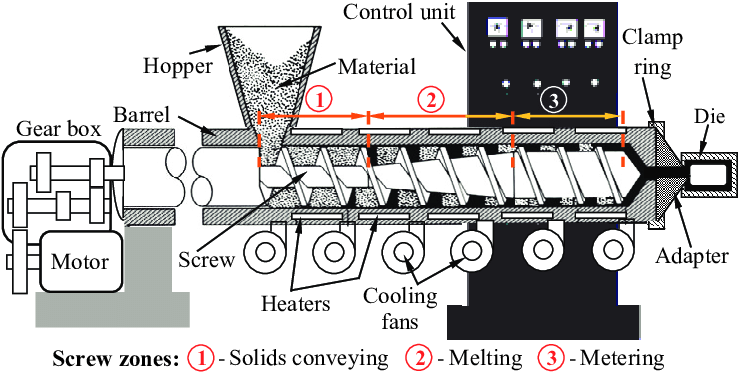 PVC is an extremely versatile material and is generally supplied as a dry (powder) mix, as in the case of PVC processing. The PVC compound is sensitive to shear and high temperatures, so it is gently processed with a parallel or conical twin-screw extruder, depending on the required output and pipe size.

PE-Xa (Peroxide crosslinked polyethene) has a very high degree of crosslinking and therefore excellent heat resistance. The manufacture of PE-Xa pipes requires a highly specialised process in which a blend of PE powder, liquid peroxide and stabiliser is melted and homogenised in a twin-screw extruder. To prevent early cross-linking, a low process temperature of 160°C is used for the compounding. Afterwards, the melt is moulded into a pipe blank in a pipe die with optimised flow properties and with a very small amount of special coating.

Polyolefins are generally supplied in the form of pellets. They are particularly suitable for single-screw extrusion because they are only moderately sensitive to shear and thermal stress.

The most common type of extruder used in food processing is the co-rotating with fully meshed parallel twin-screw extruder. Screw extruders are mainly used in the food industry for the production of starch expanded food, protein extruded food, expanded feed and as special chemical or biochemical reactors.

Under the high temperature and pressure of the extruder, the starch in the grain will gelation. For example, when maize flour is puffed, the degree of starch gelation is above 98%, the crude fat is reduced by 60% or even disappears completely and the water solubility increases by more than 40%. This is why extruders can replace drum dryers for the production of dextrinised starch.

Under high temperature and pressure, plant proteins become organised. Under the action of shear between the screw groove and the barrel wall of the extruder, the proteins are strongly unfolded and arranged in a relatively straight line. The unfolded molecular chains become free and can be reoriented and recombined, thus forming a fibrous state. The fibrous structure is similar to that of lean meat, and when rehydrated has a certain elasticity and chewiness. It can be used to reorganise fish proteins such as minced fish and dried fishmeal to produce food products that mimic the flavour of prawns, snappers and chicken.

The extruder is a new type of biochemical reactor in which a series of biochemical reactions take place during the extrusion process. In addition to denaturing proteins, it also inactivates lipases, lipoxygenases, antitrypsin factors and naturally occurring toxic substances, and blunts the activity of enzymes that can cause food deterioration during storage, largely free of pathogenic bacteria, salmonella, insects and other contaminants.

Screw extruders can also be used for other industrial products, such as the paper industry, the textile industry, metal casting, oil well drilling, etc. 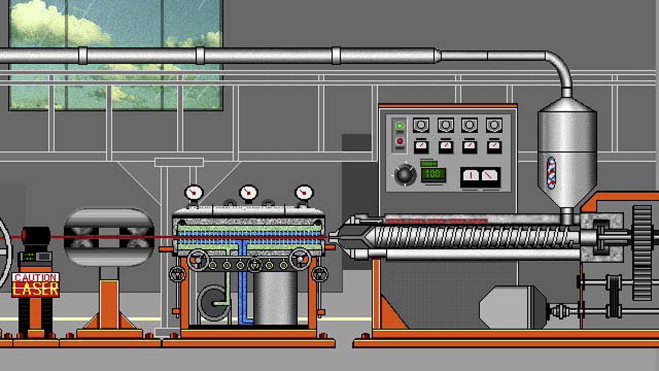 The transmission system is usually composed of a motor, a reducer and a bearing. Its function is mainly to drive the screw and supply the torque and torque required by the screw in the extrusion process.

Profile extrusion: Adjusting the speed of the extruder and changing the structure of the extruder screw can be used to produce various plastic profiles such as PVC and polyolefins.

The development trend of twin-screw extruders in the world is toward high torque, high speed, and low energy consumption. The effect of high speed is high productivity. It has unique advantages in processing high-viscosity and heat-sensitive materials. At the same time, higher productivity can be achieved.

For example, the intermeshing counter-rotating twin-screw extruder is excellent in the main application areas of pipe and profile extrusion, especially for PVC materials.

In general, the single screw extruder is developing in the direction of high speed, high efficiency and specialization. The twin-screw extruder has good feeding characteristics and is suitable for powder processing. It has better mixing, venting, reaction and self-cleaning functions than the single-screw extruder. When processing plastics and blends with poor thermal stability It also shows its superiority.

Although there are indeed many differences between single and twin screw extruders, they can also be used for some of the same applications, or they can be used in combination. So how should we choose a plastic extruder? 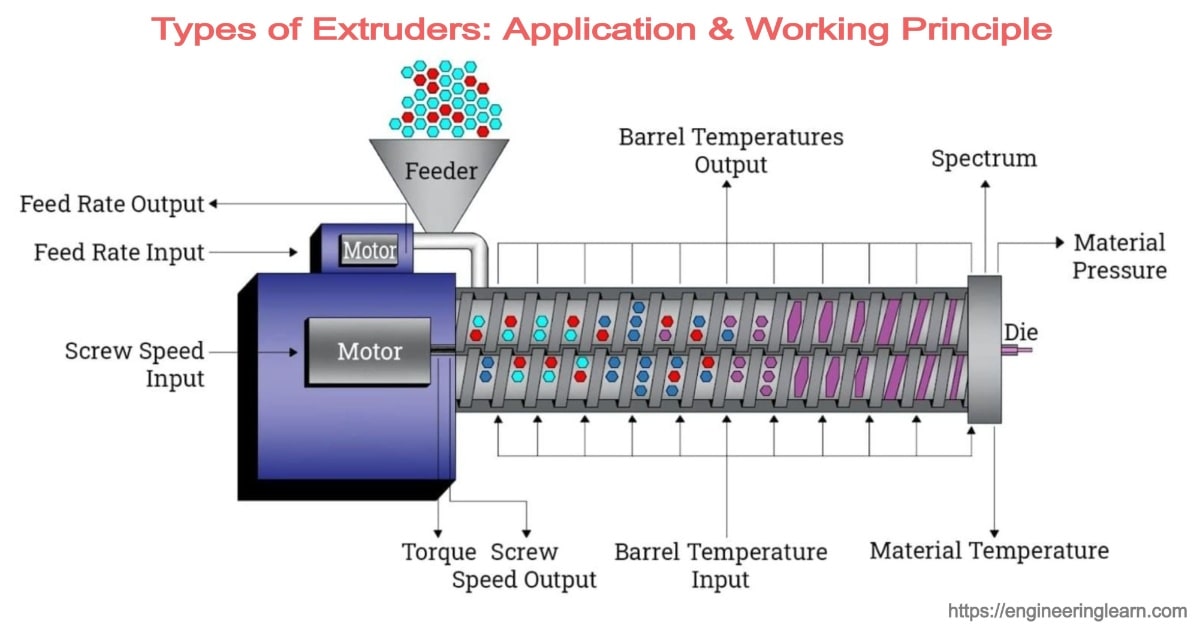 As common extruder equipment, a single-screw extruder is used in the plastics processing industry. The screw rotates in a heated barrel. Because of its simple structure, easy manufacture, high processing efficiency, and low price, it is widely used. It is the type of extruder with the most mature technology and the most consumption. The single-screw extruder is generally divided into three sections in terms of effective length. The effective length of the three sections is determined according to the diameter of the screw, the pitch, and the depth of the screw, which are generally divided into one-third each.